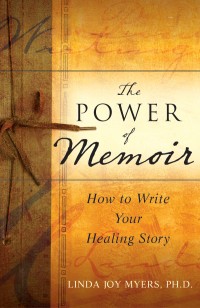 My newest book The Power of Memoir—How to Write Your Healing Story has just been released by Jossey-Bass. I’m thrilled about this, because the road to getting to a large publisher has been long and confusing. Often I had to traverse through unknown terrains to get where I am now: holding a brand new copy of my book. The cover is soft and silky, it glows in colors of amber, the pages smell good inside. Confession: I’m a book sniffer.

Nine years ago, I decided to write my first book, which became Becoming Whole: Writing your Healing Story. I organized this book from the workshops I’d been teaching therapists for several years, and wrote it in five months. I researched editors, joined self-publishing groups, and learned about the book world step by confusing step. The book was published first by a very small press, but the experience was rife with misunderstandings and problems for three years. During that time I learned about publicity: what you have to do to get people to buy books. I gave talks, workshops, and book events all over the bay area, and even in a few independent bookstores in the Midwest.

Once I was free of the contract, I went on to self-publish the book again under my own press, still learning the ropes of the self-publishing world. I learned about ISBN numbers, Bowker, The Library of Congress, Lightning Source, Amazon, layout, design, paper, fonts, print companies, shipping, and distribution. Most of all, I discovered that a whole world existed about publishing and books that I had always taken for granted. No longer!

In the meantime, I’d started my organization The National Association of Memoir Writers because of my passion to support and develop the world of memoir writing, and eager to become involved with writers like you. I wanted to create a world of memoir writers that I could participate in every day and share my knowledge of how to begin, develop, and complete a memoir. In my writing life, I was writing a novel about WWII, and had traveled to England twice and to Germany to research it. Finally, the first draft was done, and I decided to pitch the novel at the East of Eden Conference in 2008, hoping to be published the traditional way, which I knew was best for a novel.

I was teaching a workshop at the conference, so I grabbed a few extra moments to have an appointment with Verna Dreisbach, one of the agents at the Speed Dating with Agents event where you get five minutes with an agent or editor. I’d learned to always bring with me a copy of my books and the brochure for NAMW. Verna is a warm, friendly young woman with wise eyes, a soft voice, and a cascade of lovely red hair. I felt comfortable with her. I noticed that as I pitched the novel, she kept glancing at Becoming Whole and my brochure. Finally she pulled them toward her and said, “That all sounds good, but tell me about this.”

To make a long story slightly shorter—she was impressed by my organization and liked Becoming Whole. She said to sit with her at lunch, and in the meantime, she’d look at the book. Wow. I was shocked to receive this kind of reception after having gone through at least 50 agents already for my various books.

At the end of lunch, she said, “I’ll be happy to represent you.” I stared at her in shock, seeing her mouth form the words. I mumbled something, trying to make sure I wasn’t imagining this. I had virtually no expectation that I would find an agent that day. I guess having tried for so long, I thought I’d just talk to a couple of agents as a matter of course since they were there, but I’d learned along the way not to have high expectations.

She smiled, and nodded, and I realized: I have an agent! You could hear the whoops and hollers from my writing group friends all over the hall.

Later, Verna told me that one of the reasons she signed me was because I was, “Bigger than just the book.” She was talking about platform—that there was more going on than just Linda Joy Myers who had written a book. I had an organization behind me, and had created a larger network. These days in the publishing world, that is what we have to think about. NAMW is part of your platform, and there are many ways of creating your network that in future articles and workshops we’ll be talking about.

Within two months, I’d written a proposal for a new book, similar to Becoming Whole, but different. Alan Rinzler, the Executive Editor at Jossey-Bass, a division of Wiley in New York asked to meet me, and supported my book to be accepted for publication. Well, I was in shock all over again, and deeply happy.

In the cold early months of 2009, I wrote a new book, drawing upon all I’d learned in the last nine years about writing, healing, transformation, and the impressive research about how writing changes the brain. I included other things that I’d discovered through my teaching: when we place ourselves through our imagination in the body of the child we once were as we write in scene, we have a new experience. The narrator of now and the child of then each have a point of view; each has a wisdom that needs to be integrated in the mind of the author. It is this weaving, this process of going back and forth through time, of entering the world of memory that helps to change our perspective. This process gives us new eyes through which to see the world, and we become transformed, no longer experiencing our traumas, the past, or ourselves in the same way. This is a multilayered process that takes time.

I find the idea that we witness ourselves through compassionate eyes as we write ourselves backward very powerful. When we share our writing with others, we witness each other. This witnessing, according to a Swiss psychologist Alice Miller, is a very powerful part of the healing process.

Another important point that I wanted to make is the structure of story, It starts with a problem, goes through the complex layers of solving the problem or situation, then resolves, even if messily, at the end. This is the arc of the story, also called the arc of narrative. Just as your narrative goes through an arc of change, so does the writer, and eventually, the reader.

My book and I have both gone through an arc of transformation through writing and publishing The Power of Memoir. Now that my book now has a life of its own, I will do my best to guide it to the right places, and I hope to share it with many open hearts who want to be free of old restraints. It stands on its own now in bookstores and online, a book about memoir that has its own The Personal History of a Book’s Life – The Power of Memoir