Home–a Place of Memory, Surfing the Edges of Time 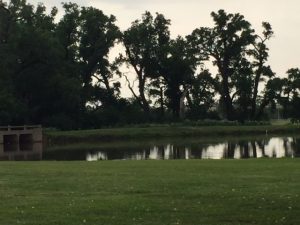 I just returned from “home,” Enid, Oklahoma, where I read my memoirs and attended  my high school reunion–more to come on that. All over town, I encountered places of memory so profound I felt I was surfing layers of time. This photo is of a small lake bordering what was Phillips University back in the 50s, tucked away in silence and peace, a place where I visit in my dreams and memories, a place of encounter that changed my life. After Rusty died, I began to write for the first time. It was a beginning I never could have imagined developing into something that would fill and heal my life. Sixty years later, I return here to speak with him, to remember. On a May afternoon this spring, standing where the winds of memory were rustling the trees, there he was, smiling.

I share him through a poem I wrote long ago to honor a boy who died too young.

the red dirt road, the hose,

the blue Dodge where we talked

about things that mattered

by the silent lake–iridescent dragonflies,

calling out our future–if only

The day he died, I washed and curled

my great-grandmother’s white hair over my fingers,

Ringlets haloed over her pink scalp,

her liquid mind flowing in and out of memory.

I called her Grandma.

slammed it on the cook-stove,

wood was chopped and stacked into cords

She pumped the engine in that stove,

high around the rim so the apple juice wouldn’t spill.

Even when you’re young

you come to count on the

moon ripening into its fullness,

sleeps in deadly gases flooding the

by molecule his blood and his heart.

He can not count on anything now

but this death by drowning in the wide

striking the glass top with its burned beak.

Iowa summer sucked lace curtains in and out,

in and out above our feather beds.

The letter came while the fire

demanding heat for the zenith of perfection,

The letter said he had passed

to an unknown place.

His father begged him to come back, sobbing,

clinging to the coffin that day in the sun,

flesh of her arms swinging, her strong hands

magic transforming into pie in the dark caldron of the oven,

oxygen and heat and gases an alchemy,

She sliced the crisp crust, apple and cinnamon singing out,

I crumbled to the floor,

hot oven baking my back,

needing the heat to strip me

as she asked how old he was,

did I love him.